As of May, I will have been chair of the Department of History and American Studies for six years.  In that time, I’ve published a monograph, been promoted to full professor, published several articles/essays, presented at over 40 conferences and workshops, was a part of the team of professional term paper writers and served on countless committees and review boards on and off campus.

But I am particularly proud of my department over the same time: over 1/3 of my colleagues have been awarded tenure, they have published 5 books (and counting), 35+ scholarly articles & book chapters, & 30 reviews/short essays served on 45 professional organization committees, including as book series editors/members of editorial boards, as conference program or book prize reviewers, & as officers (including two presidents) of professional organizations, they have presented at hundreds of conferences, and served as at least as many committee years. We have established a program that has a two-semester methods class and integrates concepts of digital identity and digital fluency more deeply than any other history and American Studies program I have seen.  We have created 45+ new courses in that time and we contribute to 12 majors and minors, including new programs in Women’s & Gender Studies, Museum Studies, Urban Studies, Social Justice and Digital Studies.  I don’t pretend that my tenure as chair resulted in this amazing productivity of these teacher-scholars, but I do know that I’ve worked as chair to help support and serve them in that mission and I’m proud to call them colleagues.

I am also incredibly proud of our students.  We have an amazing set of History and American Studies students with a track record of creating rich digital projects, a decades-long streak of student winners of the campus writing contest, Phi Beta Kappa membership, earning departmental honors, publishing senior theses, and of students going on to graduate school (70% do within 5-10 years) and finding terrific professional positions.  Perhaps more importantly, they are thoughtful, smart, engaged people, many of whom are already making contributions to their chosen fields.

All of this is to say that I’m in an awesome department, one that I’ve been honored to serve as the chair of for the last six years.  But it’s also time to move on, if not from the department, then from my chairing of it.  If you read my blog or follow me on Facebook or Twitter, then you know that I’ve been particularly passionate about the intersection of teaching and technology for over a decade.  I’ve been offered an opportunity to follow that passion and at the school that I continue to cherish.

As of May, I will step down as department chair and begin my new job as UMW’s Special Assistant to the Provost for Teaching, Technology, and Innovation.  This new position is a half-time teaching position, so I will still get to work with students in my classes each semester.  But the rest of my time will be focused on the ways that technology, teaching, and research intersect and lead to innovation at UMW and beyond.  Specifically, I will be working with the directors of UMW’s terrific Center for Teaching Excellence and Innovation (Mary Kayler) and the Division of Teaching and Learning Technologies (Jim Groom).  [A privilege since both have been making me and many other UMW faculty look cutting-edge for years.]  I’ll also be collaborating with IT, Speaking Center, Writing Center, Library, Events, and Student Affairs to get the new Information Technology Convergence Center up and running. I’ll also have the following responsibilities*:

I am incredibly excited to take on this new position and to be able to build on the excellent work that Mary Washington’s faculty, students, and staff have already done in this area.  Look for more here in the weeks and months to come about the process, potential, and progress in this new position for me.

—————————–
*In some ways, I’ll also be expected to talk even more about the work that is happening at UMW and elsewhere in the field of the digital liberal arts and digitally enhanced pedagogy.  So, I plan on taking up my writing for ProfHacker again (that’s a public commitment Jason and George….) and look for more posts here as well.  I also see my service on the new THATCamp Council as fitting in with my new expanded role here at UMW. 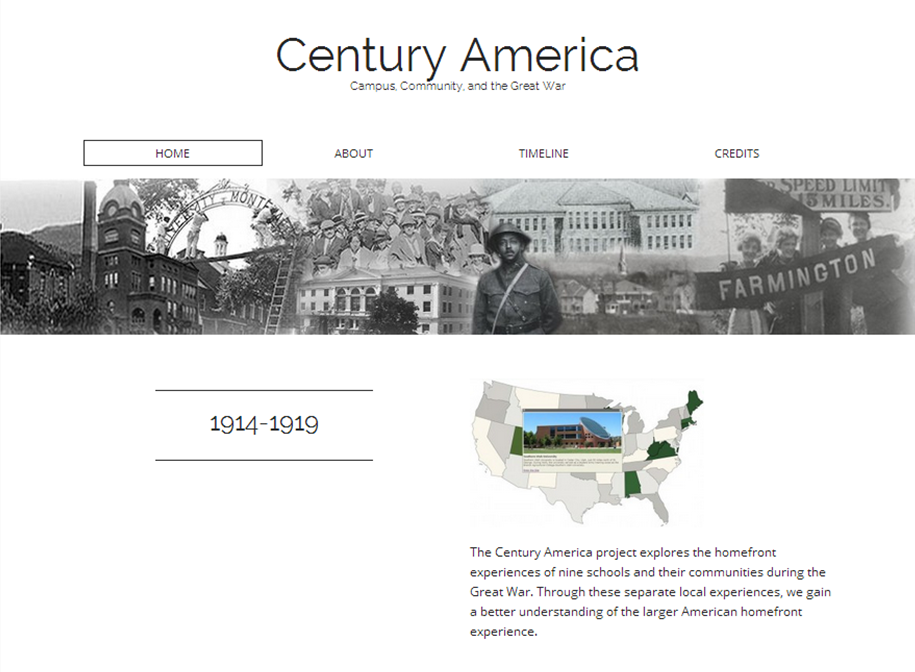 This post is my contribution to UMW’s Digital Scholarship Institute discussions.

I should start by confessing that I originally proposed four different ideas to talk about for my week: a nascent digital project on a poisoning case in a mental institution with Pinkerton detectives, as well as my courses on Digital History, the History of the Information Age, and this course, Century America.  Mary Kayler wisely advised me to pick just one, and so I chose Century America as the best combination of unique approach and sufficient work done to have something to talk about.

So, what is Century America?  I’ll let Bill Spellman, Director of COPLAC, introduce it. [This is from the Chronicle of Higher Education.]

“Century America,” launched by the Council of Public Liberal Arts Colleges, is a digital-humanities project in which undergraduates on nearly a dozen campuses will produce a website documenting daily life during World War I.

The project combines the virtual and the local—engaging students in exploring and mastering digital tools and resources while delving into the histories of their own campuses and communities. By semester’s end, the undergraduate researchers will produce a web-published product that will provide narrative and photographic overviews of campus and community life during World War I. The project will also document the impact of the global influenza epidemic of 1918-19 on those communities. This final product, accessible online, will make contributions to historical understanding locally and nationally.

Using distance technology, student researchers on the 11 campuses will collaborate with one another and be guided by academic mentors—Ellen Holmes Pearson, an associate professor of history at the University of North Carolina at Asheville, and Jeffrey McClurken, chair and a professor of history and American studies at the University of Mary Washington.

Students enrolled in the online seminar will blog about their progress, learn to create digital maps, integrate timelines into their work, and practice digital presentation. That approach to collaborative learning blends the traditional benefits of a liberal-arts classroom, high-impact undergraduate research, online teaching of digital skills, and the technical proficiency necessary for historians in the digital age.

The ultimate goal is to have each student create a site about their own school and that school’s community’s experiences during the Great War and the Influenza epidemic that follows, but within a framework of a larger overarching site (built by the four UMW students who are part of the class).

As you can see from this introduction and from the syllabus (which will give you a good sense of the structure and the assignments), this is an unusual course.  Some have called this a “distance mentoring course,” but I like to think of it as a small, private, online course (especially to contrast it with the Massively Open Online Course).  It is being taught by faculty from two different schools, and with students from nine different public liberal arts colleges. [We began with 14 students from 11 schools, but two students had to drop out because of other commitments.]  It takes advantage of various distance-learning technologies/systems (Skype, Bluejeans, Cisco Movi-Jabber, and MCNC) to enable students in three time zones to have the same kind of powerful interactions with faculty and with each other that UMW and other liberal arts institutions pride themselves on.  Most online course are larger and/or asynchronous.  We meet together as a group in real time, 1-2 times each week, even as we are spread across the country.  I’m not aware of any other course that brings together students from so many different schools to create a digital project together, especially one that provides both support and autonomy to build those projects.

In terms of opportunities for the students, they have access to the expertise of two faculty members not at their institution, as well as many other resources from the various schools (including help from UMW’s DTLT), they have a chance to be part of a project that weaves together nine different local histories of schools and communities during the Great War with an overarching national narrative.  They have the chance to see those different community histories through the eyes of people who are deeply interested in those communities because they are a part of the modern version of that community.

The distance learning aspect represents the biggest change for me, having never taught online before.  In some ways it’s more challenging than face-to-face classes: the video-conferencing technology isn’t perfect and it’s not easy for multiple people to talk without some pauses.  It’s challenging in that it’s hard to read body language or to see people getting ready to talk or any number of cues that can be easily recognized by experienced teachers in the classroom.  It’s also more challenging because the casual conversations that we typically engage in as faculty before and after classes simply aren’t there.  So, getting to know the students as people is more difficult.  Still, Ellen Holmes Pearson and I have worked to engage with students on their blogs and via Twitter (the class hashtag in #HIST1914).

Dealing with students at different schools also has raised other issues, including differing student expectations, differing tech support levels,  and differing research environments.  We’ve tried to address those with clear guidelines, assignments aimed at building tech skills, support from the UMW students in the course (building on the concept of tech mentors), and lots of discussions about archival research, citation, copyright permissions, and many other topics that you can read about in the syllabus.

The finished drafts of the projects are due April 3 and they look like they are going to be phenomenal.  [See links off of here to check them out.] I believe that they will serve as a resource for some time to come for the public to use.

I think that the course has the potential to serve as a model for one way that liberal arts institutions can engage in online learning without giving up the core values at the heart of what we do.  However, I’d like some help in thinking through:

I look forward to hearing your thoughts.